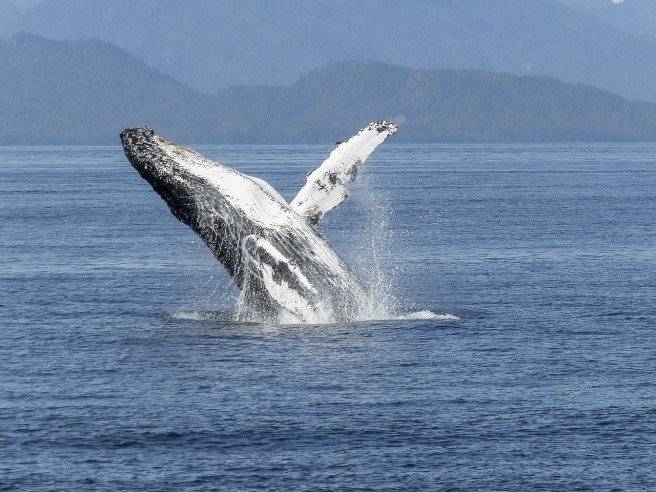 Whales are very likeable creatures. They are highly intelligent, sentient and social. But without a doubt, they would make terrible chefs and untrustworthy food critics. It seems that somewhere along the evolutionary path, whales lost their sense of smell and much of their sense of taste.

Baleen whales are some of the largest animals in the world and spend most of their time below the water surface, making them difficult to find and even more difficult to study. The group of Japanese researchers at Kyoto University worked around these challenges by using genome sequencing and fossil records to study the evolution of smell and taste in toothed and baleen whales. The researchers isolated DNA from minke whale meat purchased at a fish market and sequenced it to assemble the entire genome of the minke whale. For comparison, they also used the previously sequenced genomes of the bottlenose dolphin, a toothed whale, and cow, which, along with pigs and hippos, belongs to the same clade as cetaceans.

In mammals, odours in the air are detected by different receptors in our nasal cavity. When they compared the whale genomes to the cow genome, the researchers found that both whale genomes had lost a large number of genes required for odour detection. The most notable of these is the family of genes known as olfactory receptors (OR). The cow genome contained over 900 functional OR genes while the minke whale and dolphin genomes contained just 70 and 12, respectively. Mice, with their keen sense of smell, have over 1000 OR genes.

Toothed whales completely lack the parts of the nervous system required to detect and process smells. These include the olfactory bulb (OB), a structure in the forebrain, and the olfactory tract, the bundle of nerves connecting the olfactory bulb to the processing areas of the brain. In baleen whales, these structures are still present but much smaller in size. While most mammalian OBs have a dorsal (top) and a ventral (bottom) side, the OB of baleen whales was missing the dorsal side. By examining fossils of whale skulls, the authors traced the loss of the OB dorsal side to the Eocene epoch 56 to 34 million years ago when the ancestors of modern whales migrated from land to sea.

Can baleen whales still smell with their small, incomplete OB? It’s hard to say for certain. But even if they did retain a sense of smell, it’s unlikely that they are able to smell underwater because their nasal cavities remain filled with air when they dive. Despite this conundrum, studies have suggested that some species of baleen whales may use smell to find the stinky plankton and krill that serve as their main food source. On the other hand, toothed whales, which have none of the olfactory organs, rely primarily on sonar and echolocation to find their prey.

When it comes to taste, whales don’t fare any better. The researchers found that both the minke whale and dolphin genomes had lost the taste receptors for three of the five primary tastes – sweet, bitter and umami (the other two are salty and sour). In an earlier study where researchers examined the genomes of 15 cetaceans, they found a massive loss of genes for sweet, bitter, umami, and sour taste receptors. A whale’s palate is basically limited to salt, which seems fitting given their watery surroundings.

When we eat, the flavours are released through chewing, thereby allowing us to taste and savour each bite. Given that whales tend to swallow their food whole, losing the ability to taste would not appear to be a huge impediment. But being able to taste has important evolutionary benefits. Taste cues like bitter and sour warn us about food that has spoiled or contains toxic substances. Without a full set of taste receptors and a lousy sense of smell, whales may not be able to detect and avoid environmental threats in the water like oil spills, fertilizer runoffs or inedible debris.

© Betty Zou and Eat, Read, Science, 2015. Unauthorized use and/or duplication of this material without express and written permission from this blog’s author and/or owner is strictly prohibited.
Loading Comments...
%d bloggers like this: